Tonight I sat at my grandparent’s kitchen table, feasting on a salmon supper my mom made to celebrate my Grandma Nola and Grandpa Oscar’s 65th wedding anniversary with them. After supper was complete, my grandparents, uncle, mom and I enjoyed bakery cake I brought with a special photo on it from their October 6, 1951 wedding day.

This afternoon, my grandma said with a smile on her face to me, “I don’t know what you did but I know you did something sneaky to get all of these people to send us cards!” There were five new cards in the farm mailbox today and a bowl in her dining room filled with others that came earlier in the week. Thank you to the friends and family who helped with the “sneakiness” and if you still want to send a card, please do. If you need their address, send me a message.

Below is my Agweek column I wrote last week about my observations and memories of my grandparents’ marriage, honoring and celebrating a lifelong commitment. 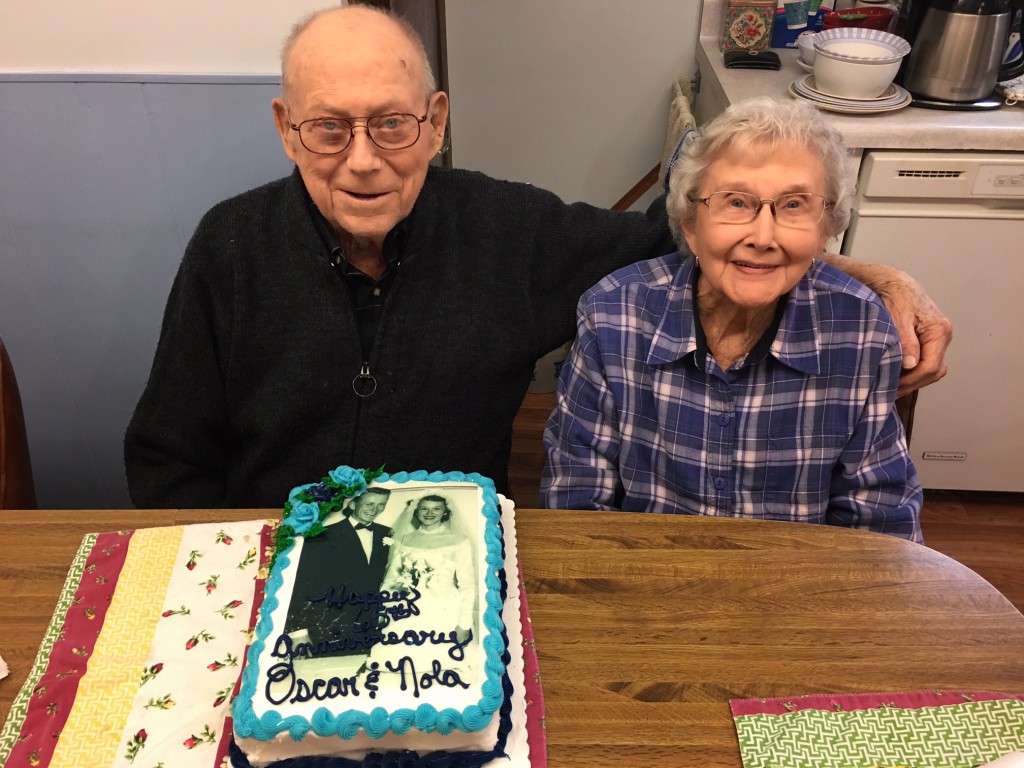 Celebrating 65 years of marriage together.

Less than 5% of marriages ever reach 50 years or more. This week my grandparents celebrate 65 years of marriage. My husband, Nathan, and I are approaching the 10-year mark. We take it one year at a time with a goal of reaching the 50-year milestone. If we reach 65 years of marriage, it will be even sweeter (and I hope our retirement accounts are still paying out because we’ll be in our 90s).

Recently, I read a study on how local culture impacts marriage.  My grandparents grew up on the same gravel road they live on today. In fact, they live in the house my grandpa was born in more than 90 years ago. Do their rural roots contribute to their long marriage? Data would say yes—but data doesn’t tell the story of their marriage.

I’ve shared about the significance of long marriages before but it’s not a trendy or popular topic. Sure, you’ll see the #WCW (women crush Wednesday) or #MCM (man crush Monday) hashtag shared with a picture on social media, but that’s a vogue way to publicly affirm who you’re (or wish to be) connected to. The longest, most successful romances and marriages I’ve observed are quiet, committed and often go unnoticed by the public.

Hollywood headlines showcase famous marriages and breakups. The long marriages persevere without making headlines. A couple of years ago, my grandma told me, “You marry someone you have a lot to share with. I married a neighbor. We just fit together.” 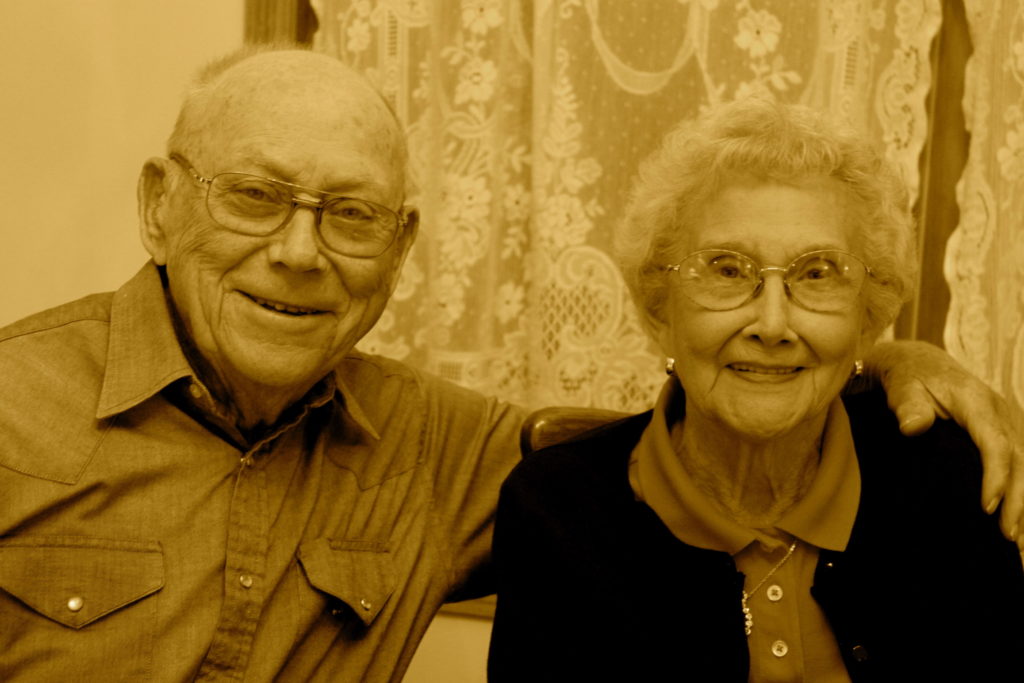 From their early days growing up on the same gravel road and attending the same one-room schoolhouse, they’ve shared a lifetime. My grandpa is five years older than my grandma, but when he returned from World War II and went to college, she was living in the sorority house across the street from his fraternity. They weren’t just neighbors on the same gravel road. They were neighbors in college. They did indeed fit together.

One aspect of their marriage I respect is self-sacrifice. They both give as much as they can to one another. Both of my grandparents have college degrees, which is rare for their generation. As a young married couple, they returned home to farm and raise five kids, all who are rooted in the same selflessness—put others ahead of yourself.

A 1951 wedding memory on their 65th anniversary cake!

The humbleness of their marriage and willingness to love the other through the various seasons of life is honorable and worth celebrating.

To this day, my grandparents are still loyal to each another. On Oct. 6, 1951, during a ceremony in a small-town church, they made a commitment and their bond has never wavered. 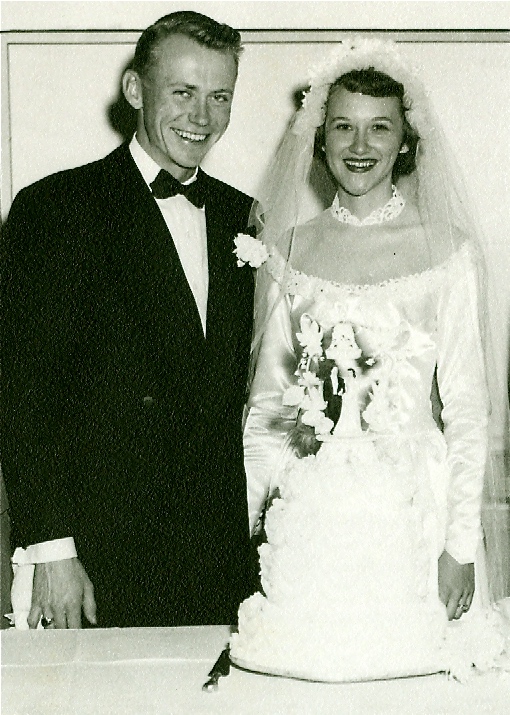 October 6, 1951, in the church where they still are members today.

This past year has been difficult. With age comes more unexpected losses and sickness. I’ve sat at the kitchen table gripping a cup of coffee my grandma poured to talk through the difficult moments. Their resolve and faith gives me peace when I need it most. Side by side my grandparents are rooted in their marriage and bond.

My brother and his wife are expecting their first child in November. I’m excited to see my grandparents hold their sixth great-grandchild. With age brings new life. Generations grow from examples set before them.

There are a few things I’ve taken for granted in my life, including my grandparents’ marriage. Our rural, farm, old Norwegian way doesn’t often talk or share too much emotion. But celebrating 65 years of marriage makes me emotional. On their anniversary, I will be sitting at their kitchen table with a cup of coffee and not take the moment for granted.

If you have been blessed with a long marriage, tell your spouse what you love and appreciate about them. Don’t take it for granted. If you’re a few years into marriage, find mentors who model the hallmarks necessary for a lifelong marriage. If you’ve been broken by the past, your first try at marriage didn’t work or you’re still looking, I’ve been there before. I found my lifelong partner on an airplane to Kansas City. There’s always a grand plan ahead of us we cannot see.

I hope my journey includes many, many more years of marriage to Nathan.