This past weekend while staying at our nearby prairie lake, I had an empty feeling, a tinge of loneliness, even though family surrounded me. What was I missing? It hit me while cleaning up after supper on Friday night. Then again on my Saturday morning walk, I felt it.

At the lake Charlie always followed me in the kitchen to clean up anything I dropped. He would make sure niece Nola’s crumbs weren’t left behind and he was my walking buddy. Even last summer at age twelve, he pulled me on our walks, at least for the first three miles. 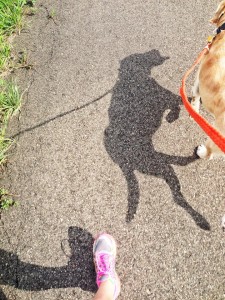 I’ve wanted to write about Charlie since we lost him on Good Friday. To cope with my tinge of loneliness I started on an album of Charlie photos this past weekend which will eventually make a book. Seeing the photos brought my words together. 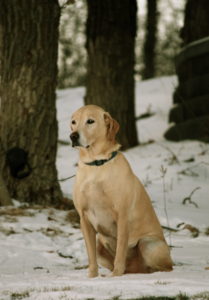 Charlie was my husband, Nathan’s dog before I ever met him. On our first date ten years ago, one of Nathan’s “key questions” for me was, “Do you like my dog?” It was a deal breaker. Sure, I loved yellow labs and had them as farm dogs my entire life. I passed the test.

But Charlie was not a farm dog. He was a dog child I came to learn. Nathan had trained him. He went “potty” on command and never created a mess in the yard. He needed a wide-open field for that business. He slept on a pillow. When I met Nathan he actually slept on a pillow next to Nathan’s bed and was covered with a blanket.

Charlie was definitely not a farm dog. But he was a fishing dog, always standing guard at the front of the boat and wanting to bite any fish we caught.

He moved in with my in-laws when Nathan’s past work travel became hectic, rather than always being boarded during business trips. Charlie quickly forged a forever bond with my mother-in-law Carol as she taught him to do morning tricks for treats. Every morning after Carol was done with breakfast, Charlie would wait for his special treat time. He would jump through a hula hoop, roll over, give five and ten (both paws) for Carol, only to be rewarded with dog treats. Most of the time, they were homemade dog treats by Carol, in the shape of a dog bone. Last week, the girls and I found a video of a little Elizabeth doing tricks with him. It will be cherished for decades.

Nightly, Charlie was my father-in-law Eldon’s walking partner. 7:00 p.m. on the dot, regardless of North Dakota weather, Charlie was ready. My in-laws decided to keep their nightly walks going and now walk after supper together in the evening. But I know they miss their favorite walking partner as I do. 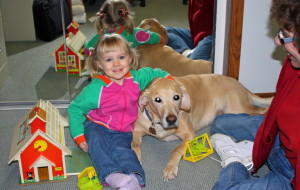 I joked Charlie set up a joint visitation agreement with us when we moved back to my husband’s hometown nearly eight years ago. I would take my baby girls to Carol for daycare as I worked from home and Charlie would come back with me, spending days with me in my home office. Last fall, Charlie and I walked over 100 miles together in three weeks while Carol and Eldon adventured on a vacation.

He went most anywhere with any of us. If Charlie was left home alone he would get bored and most everything needed to be locked up, or Charlie would get to it. He would hold his head in shame if he had been naughty, and was always quickly forgiven. Daily, Charlie would whine in front of the refrigerator, for his favorite snack, American cheese. The vet even noticed once he must get too much calcium based on how strong his toenails were. Maybe Carol cut back a little then, but she still always had cheese for Charlie.

If you’re a local, you would have seen Charlie in our family lumberyard or riding shotgun in Carol’s car. Even though many would say he was “just a dog,” he became a family member. 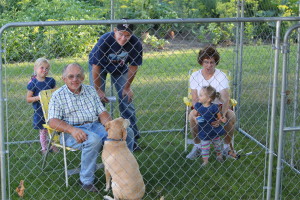 Elizabeth made everyone sit in Charlie’s outdoor kennel with him on this photo.

We miss him. Our younger kids have never known life without Charlie. Life is quieter without him, especially for Carol.

Nathan can finally talk about it now but when we had to take Charlie to the veterinarian on Good Friday afternoon, we knew it was the end for him. His back legs had quit working and we couldn’t let him suffer. We all said our family farewells in Carol and Eldon’s living room. Nathan and I loaded him in the pick-up with us.

Normally when I drove 26 miles to the vet with him, he would whine and be anxious. Truthfully, we couldn’t say the word “vet” without him whining. When I would turn on the highway towards the vet clinic, he knew and would start whining more. Our vet care was fabulous but the place just made him nervous of the unknown. As silly as that might sound, he knew more than I expected from a dog.

But on Good Friday, he was at peace. He never cried. He never whined. He never barked. It was like he knew it was the end. When Nathan and I both said our farewells at the clinic, he also knew we weren’t coming back. It was nothing I have experienced with an animal before and one I will never forget. 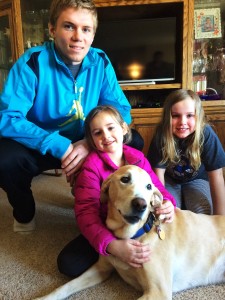 I am a woman of agriculture and tend to think of myself as having a thick skin with animals. I know food animals better than pets. But Charlie is a pet that changed me over the past decade. He connected our family together. He is woven into our stories and daily life moments. And if you have ever lost a pet that became your dear friend, you understand. I miss him more than I ever knew I would.

Until we meet again, Charles Finster Pinke. Don’t sneak too much cheese in dog heaven.

Have you lost a much loved pet? How long did you wait to get another pet? It’s a debate we are having around here. Another dog won’t be the same as Charlie but Anika, age five is really hoping for another dog child she can love just as much.