It was eight years ago today. I went to the airport gate counter as my name was called by the gate agent in Minneapolis. She just about handed me a first class upgrade.

Until the next gate agent said, “Oh wait. We have a “Platinum” here that gets that 4B seat.” She handed a man in a blue shirt the boarding pass and instead gave me seat 10E.

I never looked at the man in 4B. I was annoyed I was in a middle seat in coach. It was a Monday morning. I had left Fargo at 5 a.m. This was my connection to Kansas City where I went and worked a week out of every month at the time.

It was July. I was used to the routine. Except July was when my son wasn’t home with me, instead visiting his other family for a few weeks. I felt unusually lonely. A previous long relationship had ended a year ago. I had promised myself a year of being single, to get my priorities straight, to reassess and to enjoy my growing son even more and focus on my career. Dating was no longer a priority. I was happy with my son, my job and my house. We could have a life on our own and be happy with it.

Back in 10E from Minneapolis to Kansas City, the man in 10F became a chatty neighbor and decided to talk over me to the woman in seat 10D. Then, he would ask me questions throughout the flight also. “Where are you from? Oh, where do you live in Fargo? You are from a farm? Can you drive a tractor?” He peppered me with questions. It was annoying at first. Then, I thought he was flirting with me. I got a bit defensive.

The chatty neighbor told me about how he had just gotten engaged at a Minnesota Twins game. Somehow he seemed then just like an enthusiastic talker and not as annoying.

For more reasons than I was going to ever tell him, yes, I was single.

The chatty neighbor said I needed to meet his boss.

I sarcastically argued why I did not need to meet his boss. “I suppose he is tall, dark and handsome? Single? No kids? Never been married? Taller than me? No baggage right?” I had my own story. Enough baggage. I wasn’t interested in any random guy’s boss.

The chatty neighbor said, “Well, I am not a very good judge. But I think so. He’s sitting right up there in one, two, three, four. Four B. He’s about 30. No kids. Not married.”

Seat 4B. The man who took my first class seat.

We had just landed in Kansas City. He was in a blue shirt, taking his bag out of the overhead when I looked ahead to see him. Indeed. Tall. Dark. Handsome.

Too good to be true. Not for me. Probably a jerk. If he is such a great guy, he would be married, for sure. Every little negative voice I had in my head was talking to me.

But the chatty plane neighbor followed me off the plane. He insisted he would call me tomorrow about meeting his boss while they stayed in Kansas City. I gave in, handing him my card, writing my cell phone number down on it.

What was I doing? He was NEVER going to call me. Or was he? It was 8:30 a.m. on a Monday when I got in a taxi to head downtown to my Kansas City office. And suddenly I felt a pit in my stomach. What if he did call?

The chatty neighbor, named Josh, did call me exactly when he said he would. He arranged our meeting. After dinner. In the Plaza. Tuesday night.

I walked into the dive bar chosen by Josh with my colleague, Amy, who accompanied me, saying “Hey, it’s a conference full of men working in pharmaceutical sales. How bad can it be?”

The man from 4B, Josh’s “boss”, was wearing khaki shorts and a black button-up shirt. He was taller than me. His shoulders were broad. He was definitely tall, dark and handsome. He walked right up to me, looked me in the eye, shook my hand and said, “Hi. I’m Nathan.”

He was warm in his demeanor. He seemed safe. His handshake was comforting to me. We talked in a group and then some by ourselves at a table. He lived in Bismarck, North Dakota and was originally from a small town 100 miles from there. I was from North Dakota and had the opportunity to be in other locations but had firmly chosen North Dakota, my home, to raise my son. A fellow North Dakotan was easy for me to connect to.

And here we both were in Kansas City, on business. Nathan wasn’t supposed to be flying on Monday and certainly didn’t know he had bumped me from my first class seat. His Sunday night flight had mechanical problems, delaying him to the Monday morning flight.

Nathan liked to fish on weekends. He owned a house he was remodeling. He had a golden lab, Charlie. He was a sales manager, traveling weekly. It was a small talk but the more we chatted the better I felt about him.

And he did. He met me at the door with a single red rose. I stopped him on the front step and said, “If I didn’t tell you this in Kansas City, I need to tell you now. I have a seven-year-old son. You’ll see pictures of him everywhere when you walk into my house. He’s not here right now but he is the most important thing in the world to me. So if you have a problem with that, you should tell me now.”

Nathan looked right back at me and said, “Everyone has a past. Anything else you want to tell me?” He was firm. He was direct. He didn’t back down to my defensive front step guard I tried on him.

He calmed me. Suddenly, I wanted to spend the whole night talking to him. This was a man I could get to know. I wanted to protect my son and me. I didn’t want to get hurt. But somehow I knew Nathan was different.

We went out two nights in a row the first week. Three nights in a row the following week. And the next week too. There was no social media in our lives. No Skype. No Facetime. We spent late hours at night on the phone, in between our travels, coordinated to see each other.

The fourth week of dating he brought to a baptism of his best friend’s infant son, along Lake Superior in Duluth, Minnesota where Nathan was a sponsor, the Godfather. We had walks, talks and laughs. It was that weekend that I knew, this man was for me. Forever. I didn’t tell anyone. But I knew. And he knew. This was then… 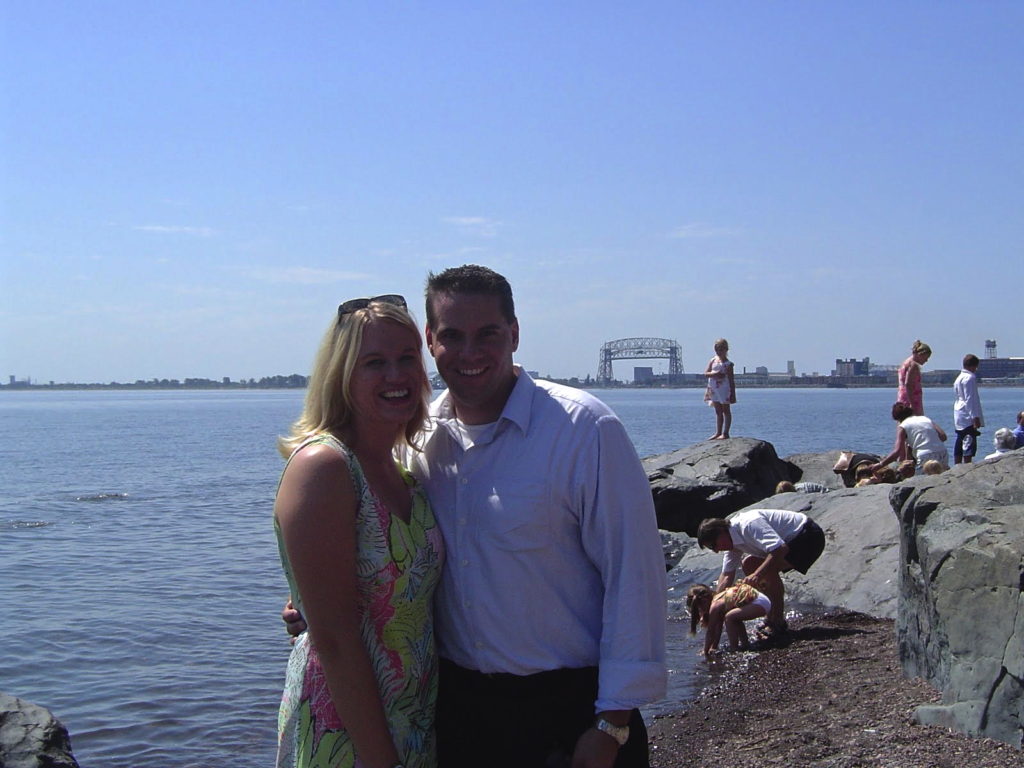 and eight years later, I can say boarding the plane to Kansas City and being willing to step out in a tiny bit of faith that it was okay to meet a stranger that a chatty plane neighbor insisted I meet was the most life-changing decision of my life.

My faith grew because of Nathan.

Fifteen months later, we were married. He became a daily father figure to my son, an answer to a nightly prayer my son had started asking for in the first grade. “A dad that lives with us” was an answered prayer.

Less than a year later, we made the decision to change Nathan’s career, drastically. We moved 180 miles deep into the North Dakota prairie where Nathan began working alongside his parents as the second generation in a family business.

We had a baby. Built a house. Had another baby. All in less than three years of marriage. Some people struggle with change in their marriage. Change cemented our marriage. We made big decisions together with faith in each other and faith in a greater plan that we cannot see. 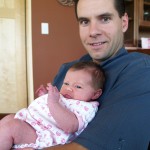 I don’t share this story solely for the “mushy” (Nathan’s word) love story. I share it because it is a real story of faith. I believe God had our lives perfectly planned. He knew long, long ago that Nathan and I would both board the flight to Kansas City. It was divinely orchestrated.

While we are not perfect, God perfectly designed our meeting and marriage. Like all couples and marriages, we are faced with challenges and struggles. But together, with a deep faith in our future and love for each other, we are better together. For that, I am hopelessly romantic and a faithful wife, forever grateful for God’s perfect planning and for giving me a husband from seat 4B.