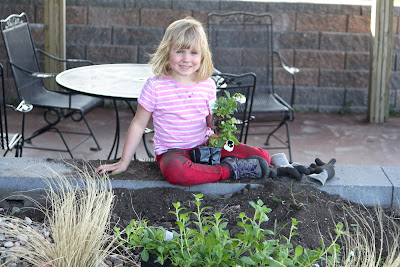 We are raising girls that dig in and aren’t afraid of a little dirt and hard work. But they are competitive. Miss E was planting “her” garden the other night with pink petunias and white and purple pansies. She was mess making but happy as can be in the dirt. As I snapped a photo, Miss A walked into the picture. 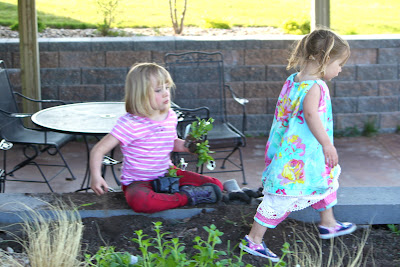 How did the older sister handle it? Well by throwing dirt at her, of course. Intruders are not welcome in the garden. 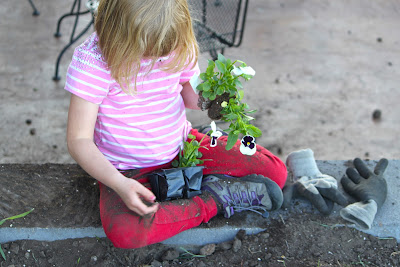 The dirt throwing of Miss E’s shooed her sister away and she just went along planting, as if nothing had happened or so I thought. Until I got closer, I realized Miss E was crying. Our girls might be dig in the dirt type, competitive girls but they are sensitive.

Miss A’s tough shell was broken by the dirt throwing of her sister.  She was sobbing. And Miss E was crying feeling so bad she had thrown dirt at her sister. 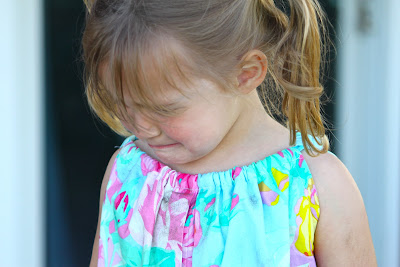 We had hugs, kisses, apologies and decided bedtime was in order. Dirt throwing had done enough damage and created enough drama for one night. The girls went inside the house with Daddy.
As I cleaned up after the dirt throwing incident I had another life lesson from my kids. Don’t throw dirt. Dirt throwing doesn’t accomplish anything. It just hurts feelings. Dig in the dirt. Together. As friends. Grow flowers, trees and crops in the dirt. Build in the dirt. But don’t throw dirt at each other. Life lessons from a 2 year old little sister with her 4 year old dirt throwing sister. Sometimes they teach me more I think than I teach them.

Previous Post: « Being a present mom
Next Post: From the voice of a North Dakota dairy farmer »