Mixing bacon with almond brittle and chocolate?
My husband’s instant reaction after tasting was “awesome”. My son’s first reaction before tasting was “gross”. Then after he tasted it, his response changed to “awkward but good”.
On Food Buzz last week I noticed the “flavor of the month” was bacon. The recipe for Bacon Almond Brittle caught my eye and I shared it on Facebook and Twitter, suggesting I make this for Hunk of Meat Monday. My almond farmer friend Brent and pork promoting friend Jodi commented that I should indeed make this for Hunk of Meat Monday. I modified as usual and added chocolate to the original recipe. It didn’t disappoint and instead was a “wow” and a keeper that I’ll make again.
Intrigued? It’s easy and certainly a conversation piece to share with family and friends. 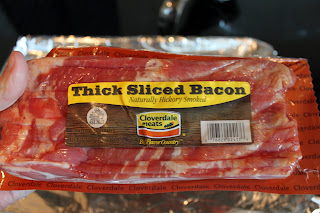 I started with 1 lb. of North Dakota made bacon. Cloverdale Meats makes a maple flavored bacon I also love. Bacon seems to be trendy these days with this article talking about everything bacon from bandages to lip gloss. You also should check out my friend JP’s fun blog post last week on everything bacon and where to find the blogs, products and farmers. 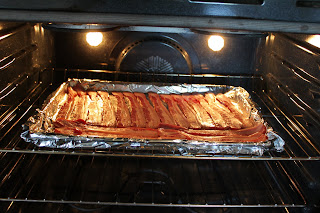 I learned from my mom to bake bacon at 325F for 20-22 minutes. I baked a little longer to get extra crispy.
Keep the oven on and turn up to 350F to toast almonds. 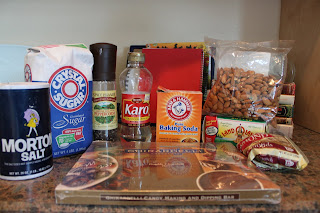 The Gastronomy blog recipe I used is adapted from I Love Bacon by Jayne Rockmill. [For Printable Recipe Click Here]
I increased the recipe by 1 1/2 approximately to make a larger batch and added Ghirardelli Chocolate Candy Making and Dipping Bar as a base layer to the brittle, adding 1 tsp. of almond extract to the chocolate.
You will need:
2 lb. chocolate dipping bar
1 lb. bacon, cooked and cut in bits
1 1/2 cup butter, cut into pats and room temperature
2 cups of white granulated sugar
3 cups of rough chopped, toasted almonds
1/2 cup light corn syrup
1/2 cup water
1 tsp almond extract
3/4 tsp baking soda
Fresh ground black pepper
The recipe called for salt but I omitted and used salted butter instead. 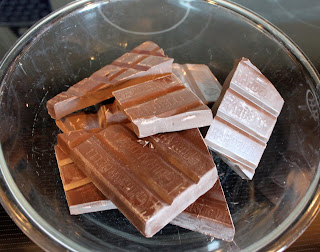 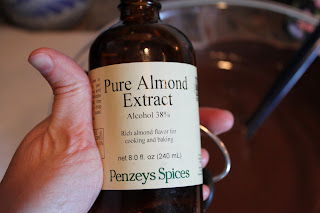 Break chocolate bar into pieces into microwavable bowl. Melt according to directions in microwave, stirring often. Add 1 tsp. of almond extract while melting. 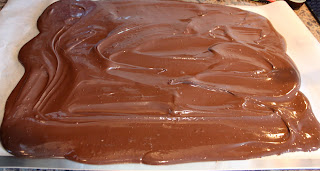 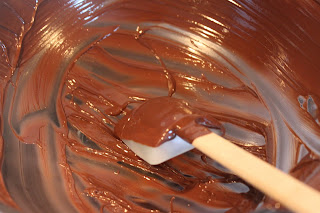 Make sure your kids are napping so you can lick the spoon. 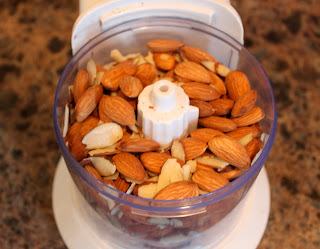 The original recipe called for dry roasted almonds. I used 2 cups of raw almonds I had and 1 cup of sliced almonds and chopped them. 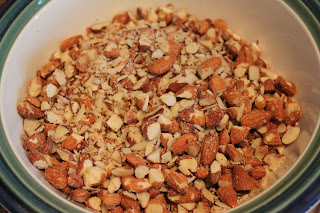 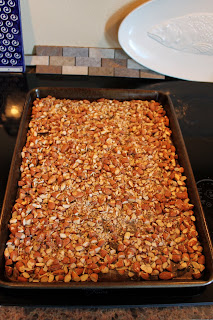 Then toast the almonds at 350F for 10-12 minutes. Directions for toasting almonds if you aren’t familiar are easy.
(Note: what do you think of the tile sample behind the pan? We picked that out for our kitchen 3 years ago and never installed as back splash but it’s still being considered.) 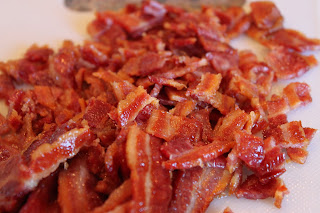 I patted down the bacon with a few paper towels to remove some extra grease.
Then cut the bacon into bits. 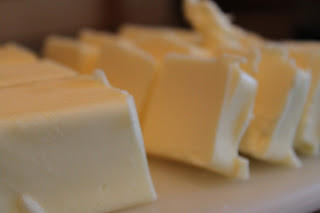 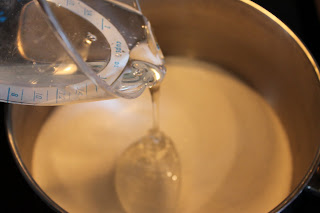 Add 2 cups of white sugar with 1/2 cup of water and 1/2 cup of light corn syrup to large saucepan. 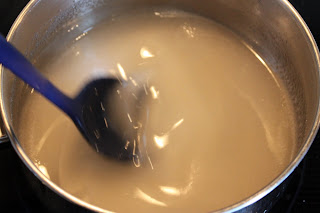 Stir for 4 minutes on medium high as it turns into a heavier syrup. 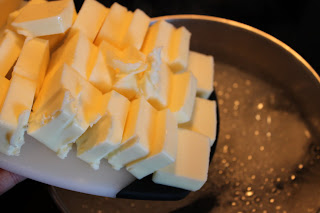 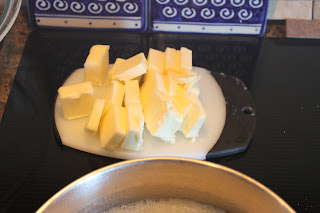 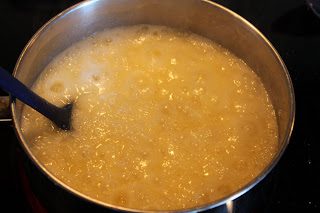 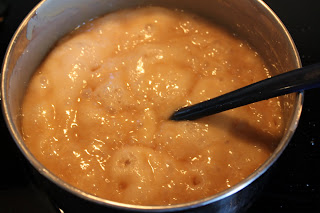 Now you have about 42 seconds to pull off the next four steps. 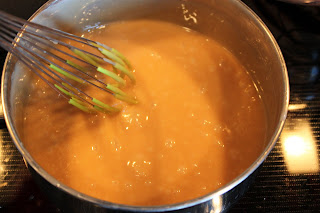 Remove the pan from heat and whisk quickly. This gets exciting. Don’t pause to answer the phone or sip your coffee. 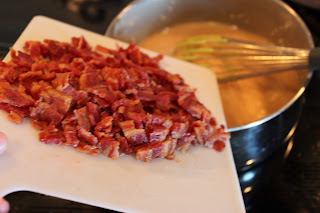 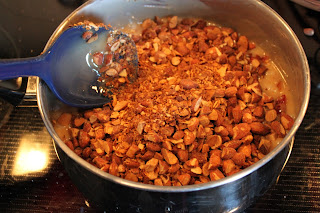 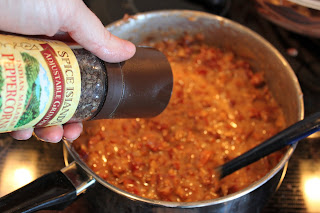 Add freshly ground pepper.
(The original recipe called for crushed pink peppercorns. Use them if you have them but a little fresh ground pepper did just fine for this batch.)
Quickly stir and spread over the chocolate. 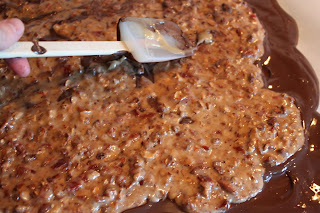 This will harden quickly and I pushed it down using a spatula over the chocolate.

Leave it to cool for a couple hours. 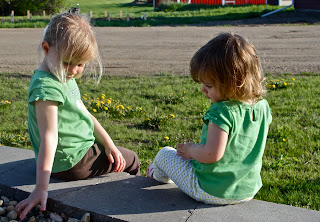 At this point, nap time was over at our house. The girls and I went outside for bike riding and flower pot planting. 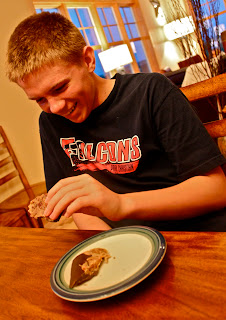 After a long weekend of a basketball tournament, the teenager and my husband returned home to try the first Bacon Almond Chocolate Brittle. 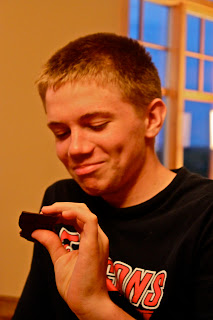 The teenager was not convinced I had created something edible. 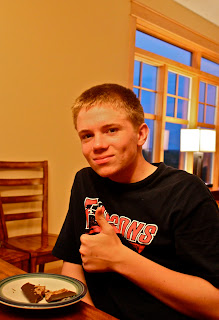 But indeed he was impressed and ate up his two pieces with a glass of water. My husband was a big fan.