I managed to grow bushels and bushels of tomatoes this year with little to no care or tomato growing skills. They were planted late, displaced, relocated from landscaping and still survived. As temperatures cooled in September I picked box loads of green tomatoes and left them to ripen in the mud room. Little did I know we would have an Indian Summer in October and I had weeks left for them to ripen on the vine if I could just keep them covered from an occasional frost. 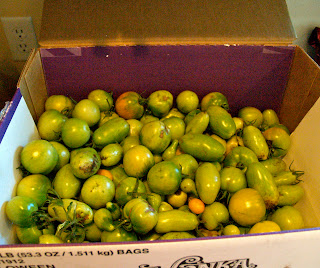 As they ripen I started to freeze some which led to chaos while cooking with kids in the kitchen. 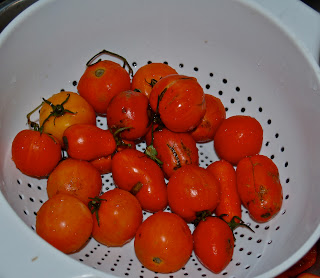 My last load of tomatoes has ripen and I have been keeping them in my extra fridge.
With the arrival of brisk November air, I decided to bravely make chili from fresh garden tomatoes this week.
In my kitchen, making chili normally usually consists of ground beef, chili powder, onion, garlic, salt, pepper, a dash or two of Tabasco and plenty of canned tomatoes and a variety of beans. Cans of tomatoes from a grocery store like Hunt’s, not freshly canned tomatoes from my garden. “Braving” to make fresh garden tomato chili might make you laugh but…I don’t really like unchartered waters in the kitchen. I like things to turn out for timeliness, cost effectiveness and let’s face it: I don’t like to fail, even when making simple chili. 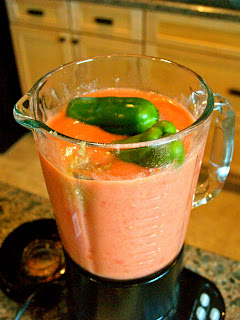 I blended tomatoes and a couple green peppers and ended up adding 8 cups of blended tomatoes to create my sauce base. Then I added 2 cups of water. My time-saving technique is to cook double almost always to freeze for upcoming “fast” meals on game nights or when I am out of town on business. 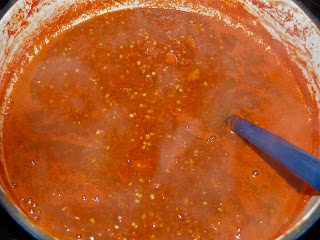 I let it boil and then turned it down to simmer, chopping up and adding a few mini (sweet not spicy) orange, red and yellow peppers, an onion and a couple garlic cloves. Then I added 1/4 cup of my favorite Penzey’s chili powder, salt, pepper to taste and 1/4 cup of brown sugar.
I then proceeded to forget about it for an hour, stirring a few times.
Then I added a bag of frozen corn, one can of Northern beans and two cans of chili beans. I skipped black beans because I just learned my husband doesn’t like them but I love them. We will make it work.
I browned and drained 2 lbs. of extra lean ground beef and added it to the chili and continued to let it simmer for another 30 minutes or so.
My mom will tell you our local and home grown venison makes the best chili. With the opening of deer hunting in North Dakota tomorrow, there are sure to be people looking for venison recipes. Our North Dakota deer graze on grains throughout the year and do not have much of a wild game flavor to the meat. Yes they eat off of our farm fields and are well fed. If we didn’t hunt our countryside would be overrun with deer and they would starve in the winter. We also would have more to hit with our cars. Hunting is necessary and since many North Dakotans have venison in their freezers, everyone should try venison in this chili and tell me how it turns it out for you. Unless you tell your kids, they won’t know they aren’t eating beef. 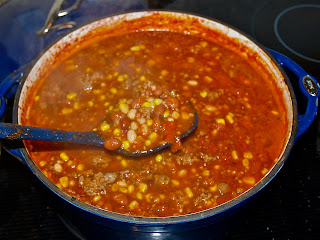 This was by far my best chili I have made and I had plenty to freeze for another upcoming winter meal.
It would be great in a Crock-Pot. The next time I make it I will indeed be using venison.
(My mom is smiling at how far I have come in my regard for venison and just downright prairie mother practicality. We have it, so we have to use it.) 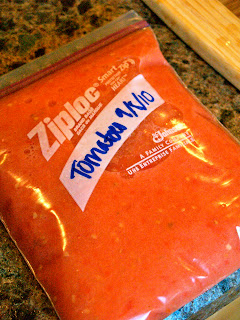 If you have a freezer of tomatoes from your garden or canned fresh tomatoes, I say they make the best chili. And if not go for the cans off the grocery store shelf. They served me well for years before I learned I can ignore tomato plants and they still produce tomatoes for me to create stunning chili on a November day!
Now the real debate…
Are you going to try venison chili or stick with beef chili?