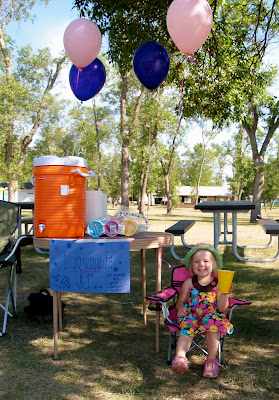 In the midst of a hot and steamy weekend in which we have been immersed in the ND State Babe Ruth Baseball Tournament being held in our backyard, Miss E became an entrepreneur.
She took on her first ever lemonade stand with all proceeds going to our baseball boosters.
E was rather shy when people would actually come buy from her but when they weren’t nearby she would boldly say “YEMONADE FOR SALE!” 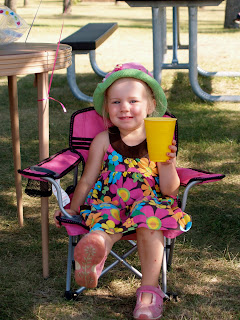 Our lemonade was just pink lemonade mix with a special ingredient of ginger ale. We then added a fresh lemon slice to the glass and charged $1 for each full 16 oz. glass. The even dollar price prevented E from having to handle a lot of coins. When we had to break a larger bill it was a good counting exercise.
Overall, the lemonade stand was a grand success, despite being a lot of work for the parents to make, haul and set up…especially when a sudden rain shower occurred.
Miss E donated $65 to the baseball boosters. She only sold during about a game and a half and people were asking for a repeat lemonade stand. Over the next five years of Hunter’s baseball, football, basketball games plus track meets, the girls will be sitting through hundreds of games and they will definitely be developing their entrepreneurial skills again with more lemonade stands.
I think we could find numerous community organizations to donate the money to and maybe the girls will also learn to make their own lemonade. For now, I am happy to keep mixing while listening to “Yemonade For Sale!”