Hunter has spent his summer attending Bible camp, a basketball camp, going to sports acceleration two early mornings a week and on a daily basis baseball is apart of his summer.
This weekend Hunter’s pee wee team had a league tournament. After winning just one game in regular season with only three 12 year olds on their team, there were no expectations for the tournament but to play hard and have fun. 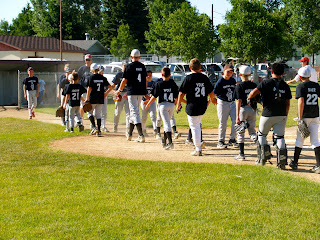 They WON their first game on Friday night, in a close game that Hunter pitched. It was quite exciting. 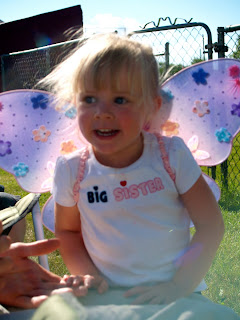 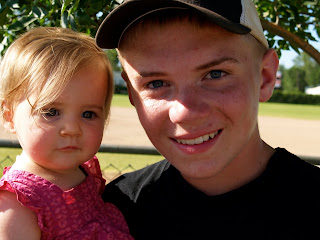 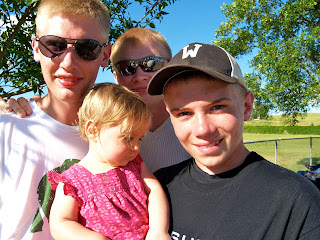 The cheering section included Uncle Joe and Uncle Robbie who got a break from the farm to drive to the game and stay overnight with us. 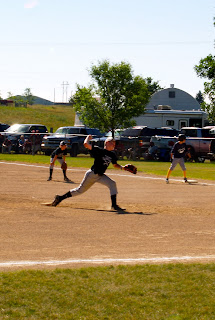 By Saturday morning at 9AM, the boys were playing again against the number one seeded team, a local rival town and team. Hunter came into the game to pitch with our team leading 3-1. Pitchers were only allowed to pitch seven innings the entire tournament which was quite limiting for our young team. These were the last innings Hunter would pitch. He got himself into a bit of a pickle allowing one run to score and then loading the bases with no outs.
This was a mental toughness challenge and test for Hunter James. 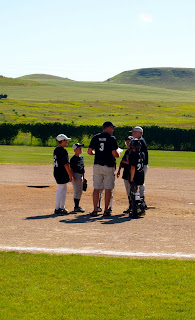 A meeting on the mound in the middle of the prairie. 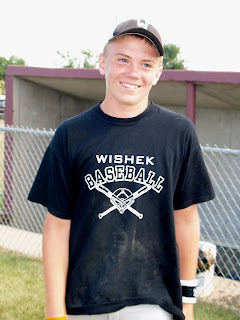 After THREE strike outs in a row, Hunter ended a tough inning and the game, winning 3-2.
The boys were now in the championship game. 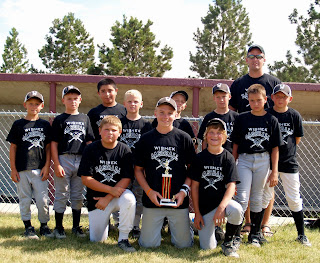 They lost in the championship to a team loaded with older boys. It was 0-0 until the 3rd inning when the opposing team starting to hit, hit, hit and score, score, score. At one point our 12 year olds had pitched their limit on innings and we had a brave 9 year old boy pitching. He struck out two to end an inning. What a kid! Hunter ended his pee wee baseball season with an in the park home run. Despite the championship game 8-1 loss, the team was happy with their success. 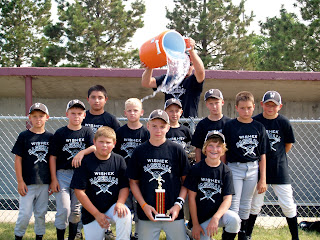 Their coach cooled them off in the 95 degree heat to celebrate!

Playing on the local prairie team is full of life lessons. You learn to win and lose with kids of all ages and talent levels. Families gather together to support our local kids and it is a wonderful part of our rural culture and community that all we enjoy together in the summer. There is no all-star team or try outs for the team. Just the boys that come out for baseball learn to play together. This season was the most rewarding season for Hunter because he learned through tough losses a sense of teamwork and perseverance. In the end the team peaked together to win and succeed.

Hunter has now flown to the west coast to visit his family there for the next couple weeks. He has been gone for less than two days and Elissa has said twice already “Hunter can come home now” and “Hunter’s trip is over”. We miss him greatly but are so proud of our baseball playing boy.
So here is to the Pinke Post’s 500th post, to Hunter James and to rewarding prairie life with summer baseball.

Previous Post: « 5 years ago I boarded a plane that changed my life forever…
Next Post: Pancakes & Quotes by Miss E »