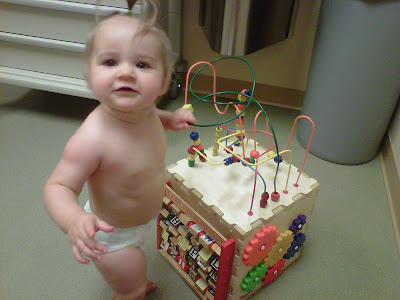 Today Anika and I had a date with the pediatrician, Dr. K.
I took a couple pictures while we waited in the room.
She was a happy girl playing in her diaper…until she had three shots after I took these pictures. The nurses brought her a little duck toy to give her which ended her tears and she said “duck”!
Anika weighed in at 21 lbs. 13 oz. which landed her in the 70th percentile.
Her length was 30 inches which was the 90th percentile and her head circumference was in the 80th percentile.
We always joke that Anika is our peanut but she obviously is not on the charts. However, compared to her off the chart sized brother who was 32lbs when he turned one year old and her big sister who weighed 25lbs when she turned one, Anika is still our little peanut girl and we love her that way.
Dr. K said Anika is going to have great teeth when she actually does get a mouth full but at this point she remains toothless.  Dr. K’s practice record for late teething is a 20 month old getting their first tooth. Wide-eyed I said in no way do we want to break that record. Teeth will make eating much easier for Anika. For the present time, she’ll keep gumming up most any foods we will give her. 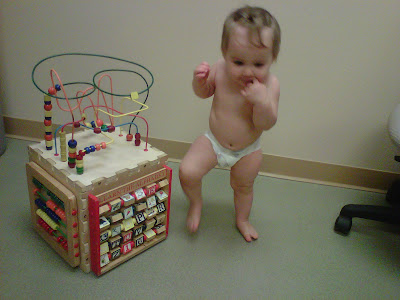 Anika is walking, babbling and saying new words all the time. Her favorites are “Nigh Nigh” for bed time, “Buh bye”, “Dada”, “Mama”, “Ozzie” (the dog at daycare) and her newest is “Up” which her cue to me that she wants me to hold her. She tries to say things like “Hi Elmo” to her little stuffed Elmo. It sounds like “Hiahmo”. But we understand perfectly.

Anika newest trick she likes to play is pulling her sister’s ponytail. We have a double stroller that the girls ride in daily. Elissa’s pony tail is most always just within Anika’s reach to yank on it. E cries and Anika thinks it is hilarious. Last night on a walk Elissa just turned around enough to hold Anika’s hand and keep her hair out of reach. As soon as E let go and turned back around Anika was back at the hair pulling again.
This marks the beginning of managing sister relations between our growing girls.