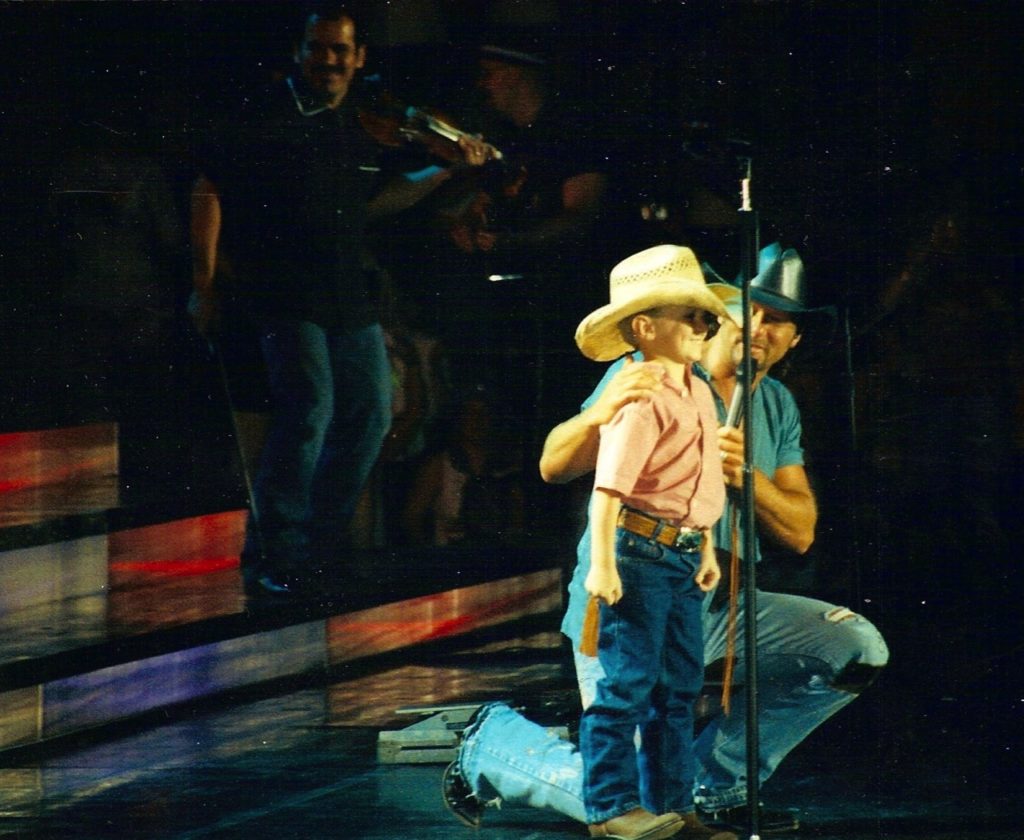 Last night, Nathan and I watched the “new” Tonight Show with Jimmy Fallon. The musical guest? Tim McGraw. It churned up an old memory for me. A look back at our son, Hunter, on stage with Tim McGraw in 2002 seemed like an appropriate “Throwback Thursday” memory to share today.

Tim McGraw was the first concert at the new Ralph Engelstad Arena in Grand Forks, North Dakota in the early summer of 2002. I helped with the marketing leading up to the concert and event management at the concert. Faith Hill, in shorts and a t-shirt, no make-up and wearing a ponytail, was hanging out with her young daughters back stage all day while we prepared for the big concert. No one bothered her unless we were asked to do something. In the afternoon, I remember her asking to take her girls to play at  a local park. She put on sunglasses and away they went. We also had to make a grocery store run for more baby food for their youngest daughter and run to the liquor store for Jameson Irish Whiskey for McGraw. (McGraw did several interviews in the last couple years that he has since quit drinking.)Later in the afternoon, I saw the McGraw family set up a basketball hoop alongside their bus and shoot baskets with their kids. They were a down to earth family.

My parents and siblings brought Hunter to the concert. About half way through the concert I had a chance to leave back stage work and I went and found them. I put Hunter on my hip and carried him closer to the stage. Standing alongside the far left side of the stage, a security guard of McGraw’s caught my eye and motioned at me to walk over to him. I did and he leaned into me and said, “Let’s get your boy up there!” He took Hunter from me, walked in front of the first row, towards the middle of the stage and McGraw said, “Bring that boy on stage!”

Thankfully, Hunter wasn’t shy then and isn’t shy now! With a grin from ear to ear, Hunter stepped right up on stage and went to McGraw. He was wearing what was my old belt and belt buckle and looked like the cutest little cowboy. He was beaming with pride. However, I was a nervous wreck.

Hunter was four years old and I had never taught him any Tim McGraw songs. Suddenly, now he was on stage! Little did I know, my sister, just 15 years old at the time, had been working with him. They had been singing to her Tim McGraw CD all week.

The band started playing, “I Like It, I Love It”. The chorus came up on the song, McGraw leaned down, put the microphone in front of Hunter. Hunter was tapping his boot to the beat and without missing a beat he sang, “I YIKE IT, I YOVE IT, I WANT SOME MORE OF IT!” McGraw stopped and said, “This boy just sang my song!” Hunter was on the Jumbotron screens across the arena.

This was pre-social media. No one had cameras or video capabilities on our cell phones but some people had their old school cameras with them. Different people were taking pictures across the arena. I turned to some friends in the third row and asked them to take pictures with their cameras. A few weeks later in the old school mail, a friend of a friend sent me the above picture.

While I love the stage of life we are in with Hunter right now in high school, it is so fun to look back to my sweet cowboy son at age four on stage with Tim McGraw.

What’s a favorite throwback memory you have?

Previous Post: « Why Is FFA Relevant For Our Future?
Next Post: The Need for Mentorship (Even In A Barn) »