The negative headlines are easier to report than the positive ones. Negative captures our attention, builds emotions, creates more conversation and feeds politicians’ agendas. I think this has been true for North Dakota in recent years. There are far more negative headlines about our growth in the heart of a nationwide American recession than positive. We have opportunity. We are building business. We are fracking through at least a mile of solid rock using new technology to bring Americans, fossil fuels like oil, coal and natural gas that we need in our everyday lives to keep our lights on and operate our vehicles.

Americans have new jobs, new money and new hope in North Dakota. How do I know? First, I am a lifelong North Dakotan. Second, I am passionate about where I come from. Third, I have seen the positives first-hand this new North Dakota is creating.

Last week, through a series of last-minute scheduling of some meetings, I had to fly through Minneapolis into Dickinson, North Dakota, where my sister and her husband reside. I met my family there. We already had a long weekend planned.

Dickinson has experienced tremendous growth and has caught its fair share of negative headlines. But as I flew jet service on Delta into Dickinson I could not help but be proud. The plane was full. There were parents with seven children sitting ahead of me. We chatted a bit how they were considering moving back to North Dakota and that they could have never dreamed of that ten years ago but now it was possible. Both parents would be retiring from the U.S. Army soon.

What a gift we have with growth in western North Dakota, I thought. A family, after serving our country, can return to where the father grew up, to a home ranch and have a continued and future life of prosperity. There are jobs for any Americans. High-paying jobs for some and jobs that pay bills for all. There are now housing options as it catches up with the growth. There is limited but some available daycare. More entertainment. More hotels. More food options. It is truly the American dream. It might be rough and harsh in some areas but life is not a cushy ride. Dreams take hard work and I am seeing them fulfilled in western North Dakota, but rarely making headlines.

That can be said for my sister, Kirsti and brother-in-law, Mike. They are a positive headline that should be shared but are never heard from in mainstream media. 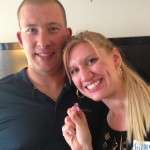 It’s a girl! Kirsti and Mike are growing their family in western North Dakota.

Two years they took a leap of faith and moved to Dickinson, North Dakota which just recently was named the top small town by Liveability. Two years ago, housing was scarce, overpriced and people were living in cars around Dickinson. It seemed a bit hostile, too edgy and was a bit nerve-wracking for me. But Kirsti and Mike found jobs, leaving stable, good paying jobs in the eastern part of North Dakota, for the chance to build a bigger life in Dickinson. They sold their first home in eastern North Dakota, bought one of the few houses on the market in Dickinson and have made it a home. They have grown in their jobs, paying down debt that millions of American couples are consumed by but Kirsti and Mike are not because of the risks and choices they took to live and work and use their income to pay off debt and build a foundation for their future in western North Dakota.

What I think is missing from mainstream media is that western North Dakota has more to offer than what a television camera or photograph can show you. More than Delta flight into Dickinson gives you. There are problems. But Detroit and other American cities have bigger problems than western North Dakota.

So before you jump to conclusions from negative mainstream media headlines that outsiders might want you to believe, decide first hand for yourself by digging into and weighing the positives of Americans with American jobs on American soil building and fulfilling dreams in western North Dakota.

I, for one, am intensely proud of the Western North Dakota story I know. 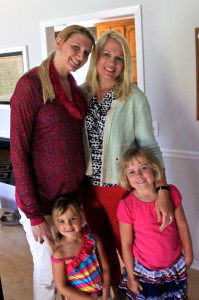 Auntie Kirsti, Miss A, Miss E and me visiting in Dickinson, ND

Previous Post: « A Life Lesson in a Ranch Rodeo Boot Scramble
Next Post: 35 North Dakota Sunrises and Sunsets of 2013 »