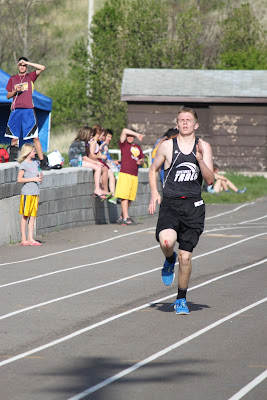 Our week has been consumed with track meets. Therefore this is my second consecutive post on the teenager and his events. But yesterday was truly a fantastic prairie day for a track meet. We were in a small town on the North Dakota prairie. Teams from as far as 120 miles away were at the meet. I was able to take off a few hours early from work to soak in the day.
The meet didn’t start off on the best foot, literally, for Hunter. He took a hard, flat out spill on the track in the 200 meter hurdles. Yesterday he did a junior high track meet instead of the varsity meet. It’s 200 m hurdles instead of 300 m hurdles. He fell last year at this same meet. It was probably a little mental and also probably that he doesn’t practice hurdles. Either way, it was a hard fall. He has scraps, bloody elbows, knees and bruised hip as battle wounds. 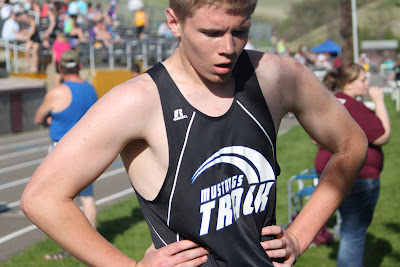 But he got back up and ran the 400 meters no long after the fall. He won and then immediately had to go throw the discus. 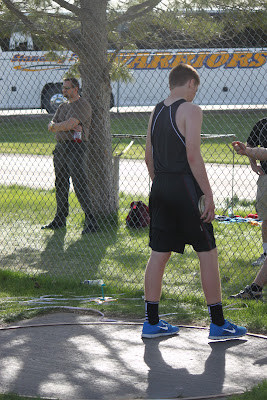 Discus is my first love in track and field. I threw discus for a decade of my life and had plans to throw discus for three or four decades of my life. But it didn’t work for me. Watching Hunter throw the discus, despite the fact he has about a mere fraction of the appreciation for the discus as I do, is more rewarding than I ever imagined. It’s a motherly thing.
But as a former discus thrower, watching him throw the discus in running shoes made my skin crawl yesterday. He needs throwing shoes if he is going to be a thrower. It’s a thrower thing. 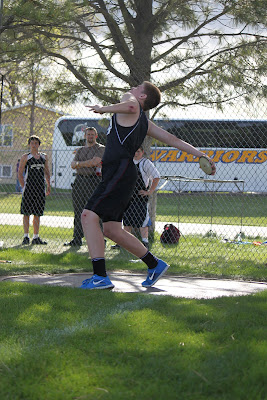 Hunter was a thrower yesterday. He got a personal record and reminded me he has officially thrown farther than I did as a 8th grader or 9th grader. For him, it feels good to “beat” his mom. For me, it was most rewarding to see him peel himself off the track, bloody, confidence shaken after the fall on the hurdles to achieve success. You can see his wounds are still there but he finished strong. He didn’t let the wounds bring him down and stop him. He kept going.
Being reminded of life lessons while watching my child is the most rewarding aspect of this week for me. We all have wounds. We all have the choice to get back up and keep going. We all can finish strong.

What’s been your life lesson this week?
Pin It